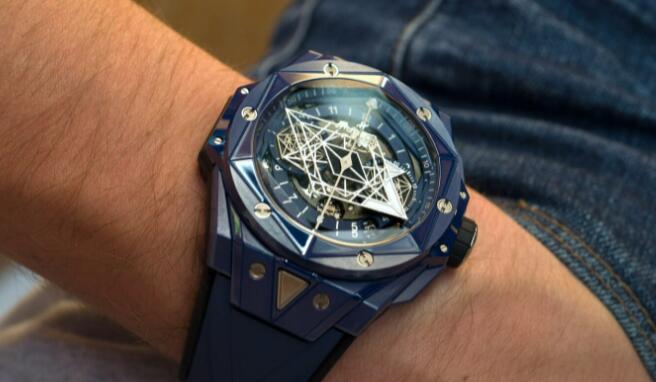 Trigger warning: the Hublot Big Bang Sang Bleu II Ceramic Chronograph is my favorite luxury watch release of 2021. More to the point, I’d rather buy this watch than any other traditional luxury watch released in the recent past. But wait! There’s reason behind the madness. Although the core aesthetic has been the same through all Hublot Sang Bleu watch collections, tattoo artist Maxime Plescia-Büchi’s design still has the power to shock/repel/impress. And while we’ll see that it is imperfect, there’s more to it than just being a $27,000 watch that should come with a trigger warning.

Probably the biggest pro, in my mind, to the Hublot Big Bang Sang Bleu II Ceramic Chronograph is that it is its own thing. And whether you like the design or not, what I’m about to say might just resonate with you all the same. I like this watch because I am not expected by a single soul on this planet to know, recite, and revel in a recent update to a font type, or to understand how my choice of watch fits into the whatever-year history of the (let’s be honest, run-of-the-mill) iterations of the same “watchmaking icon.” At the dinner table, I am not expected to back up my choice for the 40.7mm version as opposed to the 38.5mm variant, or explain why I went for the huuugely controversial rose gold as opposed to just the traditional 18k yellow gold — or be tested whether I know if a pen or a pencil was used half a century ago to draw the original design on a napkin. I can just enjoy my luxury watch because I like the way it is made and the way it looks. These are a bunch of cliché talking points I’ve encountered and overheard over the last decade. Remove them from the equation, and what is left is watchmaking in one of its purest forms — again, irrespective of whether one likes the looks of it, or not.

Sure, I admit that traditional watches can be bought and enjoyed on a selfish basis, entirely disconnected from all the aforementioned theater. I don’t mean to imply otherwise. However, the process that leads one to the act of buying said “icon” is often a weary one. It is paved with lots of overhyped history that you don’t actually care about (but are paying the price for), with much maneuvering between incremental design updates that render one iteration more “desirable” than the other (sometimes down to dial colors and such otherwise entirely arbitrary matters). And yes, sometimes even some lowly deals with sales staff to convince them that you are worthy to make the purchase. Just typing this gave me the wrong kind of chills. It’s a bunch of fluff that either comes bundled with the buying and ownership experience of high-profile traditional luxury watches — or at least something that undesirably lingers around the whole time.

However, I suspect a very considerable portion of customers shelling out $25,000 and over on new high-end watches are not buying their first $25k+ watch. They are buying their second, third, or more. And you, my fortunate fellow watch lovers, deserve to be (and should demand to be) entertained, and not be held hostage to the one-upmanship experience that is often a component of the ownership experience of more traditional watches. And this is why I find the Sang Bleu II so endearing: because its singular apparent purpose is to wow its prospective customers and keep them entertained after the fact through sheer design and, yes, outstanding quality of execution.

Good design is worthless if it is executed poorly. A major component of why the Hublot Big Bang Sang Bleu II Ceramic Chronograph is so special in real life is because it feels completely and utterly free from any sort of compromise when it came to morphing sketches into matter. And that is extremely rare. In fact, I would gently urge you to take a moment to appreciate how special that is by trying to find other luxury watches launched in the last number of decades where everything was as outrageously complex, as off-the-wall, and yet as accurately realized as they are in the Sang Bleu II.

Good design is worthless if it is executed poorly. A major component of why the Hublot Big Bang Sang Bleu II Ceramic Chronograph is so special in real life is because it feels completely and utterly free from any sort of compromise when it came to morphing sketches into matter. And that is extremely rare. In fact, I would gently urge you to take a moment to appreciate how special that is by trying to find other luxury watches launched in the last number of decades where everything was as outrageously complex, as off-the-wall, and yet as accurately realized as they are in the Sang Bleu II.

And therein lies an important point: if you look at the Hublot Sang Bleu II Ceramic Chronograph as a watch, you are considering its primary function to be to tell the time and you are implying that people should primarily make their luxury watch purchases based on how easily a watch can be read. You have to humor me for a second and let me say this: that is a podium finisher among the most snobby, eye-roll-inducing things I reckon watch enthusiasts can say. I am not saying it’s done on purpose, but I am saying that it does not make any sense. It implies that just because a luxury watch is legible, its primary function and, therefore, the primary reason why people buy it is to tell the time.

So, who cares if you can quickly or hardly (sometimes not at all!) read a 30-minute chronograph sub-dial that you don’t actually care about? Or if it takes 1 second or 5 seconds to tell the hours and minutes? Frankly, if you have $27,300 to spend on a wrist-object, you are surrounded by pieces of technology (and probably by people) who will gladly remind you of important times of the day. You won’t miss a board meeting or a real estate presentation just because your Hublot isn’t instantly legible (like your poseur pilot watch is), so please, save yourself the effort to try and convince me there isn’t room in the world for outrageous watches that are more or less completely illegible. Yes, the Sang Bleu II takes effort to read the time on, and I love it all the more for it.

An amazing wearing experience, that’s what. This really is a watch you have to see out there in the real world, in totally ordinary and everyday settings. I’d dare even the most viciously traditionalist, most watch-hating watch lover (there seem to be some of you out there) to wear this for a day or two and not crack a smile at the sheer outrageousness of it. A regular Big Bang (the Antichrist of watch design not that long ago) looks tame — boring, in fact, next to this thing. Sure, one could argue that this watch has it going easy for it: the sensory overload that the Sang Bleu II is when compared to a regular luxury watch is like comparing weapons-grade cocaine to Coca-Cola. One will have an easier job occupying your mind.

The case simply wouldn’t be what it is had it not been complemented by the geometric main hands and subdial hands, and if it didn’t have the sculptured rubber strap. The absolute icing on the cake is provided by a truly outstanding component: the faceted sapphire crystal. Add all these together and you’ll see what I mean when I say there really appears to have been no limitations when it came to turning this design into reality. To take something this complicated and make it appear so singular and coherent between so many various materials and functions is a rarified achievement even among seasoned watch designers. Most of them have either never touched a design of such complexity, or their employers didn’t allow them to even get started. I get it: Achieving the eye-watering perfection that radiates from a 38.5mm Lange 1 is a borderline holy deed and busy designs tend to do well at hiding the incompetence of their designer. Still, the SBII Chronograph has nothing to hide — it’s all about show.

By contrast, the Sang Bleu II has all the laidback coolness of a talented teenager’s sketch done on the back of a notebook (not exactly a welcome concept in the realm of luxury watchmaking, but that’s the point). Said sketch is backed by the calculated balance of a good design where not one thing could be altered without the whole thing falling to pieces. Then, all this is fused into a tangible object by Hublot’s scarcely matched expertise in working with man-made materials. Case in point: The single-piece ceramic bezel has its flat rim brushed while the concave (took me days to spot, but they are concave) inner triangles are polished, as is the vertical outside edge of the bezel. Every exposed H-screw has a polished frame that reflects at the slightest flick of the wrist while the centers are matte — apparently sand-blasted.

The dial, if we can call it that, has a handy 12-hour scale that makes reading the time easy, especially once you learn how to spot the lume-filled triangular ends of the two hands. Underneath it all, the in-house designed and manufactured Hublot HUB1240 Unico movement flashes its polished components — some so clean and shiny that they clearly reflect the geometry of the hands that pass above them. Speaking of shiny things: The long, center-mounted chronograph seconds hand reflects so brightly in direct sunshine that it almost burned my eyes out. An odd achievement, especially for a vertically brushed surface.

At the end of the day, my gut instinct is telling me that the Hublot Sang Bleu II Ceramic Chronograph will rub a lot of people the wrong way through images – but it would, be in no doubt, positively amaze most all of them when viewed in the metal ceramic. It is hugely entertaining not only for its off-the-wall design, but also because it is manufactured with a level of intricacy and at a level of quality that Hublot’s competitors either don’t even attempt to match or, if they do, they charge double or triple this much. And so, yes: Today, I’ll take this watch over any traditional luxury watch because it’s so much more entertaining and so much more elaborate.