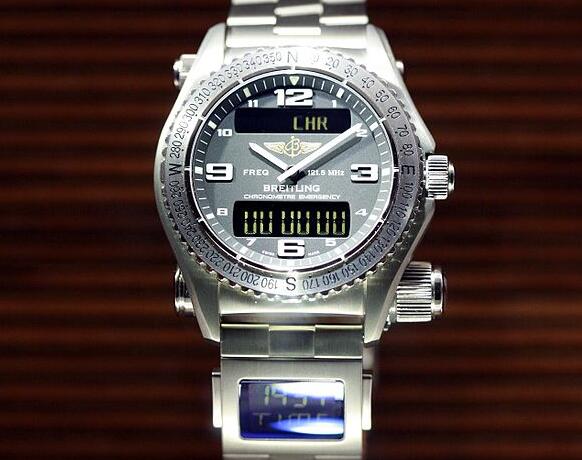 In 1884 Léon Breitling established Breitling in Grenchen – the Canton of Solothurn, in Switzerland. Breitling is one of very few independent Swiss watchmakers left.

Léon Breitling intended for his company to specialize in the field of timers and chronographs – precision instruments to be used primarily within science, sports and industry.

In 1923, they improved their chronographs by separating the resetting function from stop and start function.

In 1934, the watchmaker perfected the modern chronograph by creating a second independent pushpiece. The brand’s competitors soon adopted the same system themselves.

Since its early stage, Breitling has been the nr 1 watchmaker in the aviation world. Since the beginning of the 1930s Breitling created chronographs meant to be used in cockpits. The Royal Air Force is known to have used Breitling instruments in their figher planes during WW2.

In 1984, the Swiss brand from Grenchen announced the reappearance of mechanical chronographs which resulted in Breitling launching the famous Chronomat Collection which is the flagship of Breitling.

In 2009, Breitling created the famous Caliber 01 in-house chronograph movement which is considered to be one of the most prominent automatic chronogaph movements in the world.
There are two expressions, more than any other, that truly capture the purpose and spirit of Breitling, and these are: “instruments for professionals” and “obsession with quality”.
Breitling is the only brand in the world that submits all its movements to COSC (Swiss Official Chronometer Testing Institute). Even its quartz movements are submitted to COSC. They are called SuperQuartzTM movements and they are ten times as accurate as the standard Swiss quartz movement.

This brand is first and foremost dedicated, to developing, designing and manufacturing professional instrumental watches with readable dials and very tough, robust and well built cases and bracelets – designed to stand the test of time and merciless daily usage.
All movements utilized or manufactured by Breitling are chronometer certified by COSC (Swiss Official Chronometer Testing Institute). Both in-house made movements and ETA movements are chronometer certified.
Breitling is specialized in and primarily known for very sturdy, reliable chronograph movements with a 99.99% accuracy.

Each and every movement utilized by Breitling – be it a Breitling in-house made movement or an ETA movement from Swatch Group, is individually tested by high tech equipment to ensure best possible performance.

Their cases are specifically designed to ensure maximum protection (against shocks and impacts) for the movement inside the case. The cases are designed with the professional in mind. Breitling either uses the 316L antimagnetic steel or grade 2 titanium for this very purpose of maximum protection. 316L is a standard steel grade used by many other Swiss luxury wristwatch brands such as Omega and Tudor.

The crowns and pushpieces are sturdy and well protected too with performance and maximum protection in mind.

All their watches are equipped with sapphire crystal glass which is standard among Swiss watches.

Their bracelets are elegant and sturdy designs that are designed for the worst possible daily scenarios of wear and tear. They are designed to withstand the forces of pulling and twisting.

Breitling rubber and leather straps too are designed with protection and serviceability in mind – usually made of the finest materials.

The watch producer is aslo known for research and development. The brand is extensively involved in research aimed at optimizing their watches and movements.
The very first in-house movement made by Breitling Professional Watch, is called Breitling 01, and was launched in 2009. However most movements currently utilized by Breitling, are actually ETA/Valjoux movements procured from Swatch Group.

All their movements are chronometer certified which makes Breitling a member of a very small and exclusive club of Swiss watchmakers.

Breitling either relies on chronometer certified Swiss quartz movements or chronometer certified Swiss automatic movements – that in some cases are in-house made by Breitling, but usually are ETA/Valjoux movements procured from Swatch Group.
Breitling has a very good reputation – it’s one of the most famous, recognized and popular Swiss luxury watch brands and watchmakers in the world. Breitling is a fully independent Swiss watchmaker – one of the very few independent watch manufacturers left in the industry.

As far as reputation and ranking are concerned, I’d say that Breitling ranks among the top 15 luxury watch brands in the world.
Breitling is popular all over the world and especially in the USA. Several retailers across the globe offer Breitling watches. The manufacturer is known to produce large, masculine, good, solid timepieces with a professional instrumental look to them.

All Breitling Professional Watch timepieces are chronometers, and as far as I know Breitling is the only major Swiss brand alongside Rolex where every single timepiece is chronometer certified.

Breitling is often referred to as “instruments for professionals” and the brand is often associated with aviation and civilian and military pilots.
Indeed, Breitling Professional Watch markets itself as a brand for pilots, but the truth is, Breitling does offer an impressive range of divers watch collections, which very few other watch brands, and watch manufacturers can offer. I can’t think of any other brand out there that can offer you as many divers watch collections as Breitling!

Although the brand suffered financially from the quartz crisis in the 1970s and the 1980s, Breitling became commercially very successful again in the 1980s and onwards, largely due to the renaissance of peoples’ interest in mechanical and automatic watches, and a new Breitling management which sat a new path for the firm, and infused new energy into the company and presented a new vision for Breitling’s future.

While Breitling isn’t an example of the art of higher watchmaking, the watch manufacturer does produce solid and reliable timepieces.

Breitling is considered to be the main competitor of both Rolex and Omega as far as pricing, the level of the movements’ complications, and the purpose of the daily usage are concerned.

However, I would personally rank Rolex and Omega higher than Breitling. My reasons for that would involve: