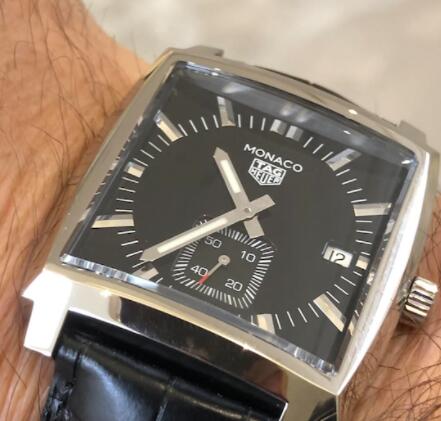 A watch movement’s that’s cheaper, more accurate and more reliable than any mechanical watch movement? Vive la quartz revolution! Actually, that ship has sailed, as smartwatches do to quartz watches what quartz watches did to mechanical watches: make them obsolete. Traditional watch makers are forgiven for retreating into nostalgia for and with their customers. But a quartz TAG Heuer Monaco? . . . .Lest we forget, the funky AF TAG Heuer Monaco is not just famous for adorning Steve McQueen’s wrist in the racing movie LeMans. The Monaco was the world’s first automatic chronograph (self-winding mechanical watch with a stopwatch function). Seiko and Zenith got there soon after, but in 1969, TAG drew first blood.

The first Monaco was powered by the groundbreaking Calibre 11, developed with Buren, Breitling and movement maker Dubois Depraz. As time went by, TAG fitted the Monaco with new mechanical movements, including the belt-driven Monaco V4. And if you think that’s nuts . . .
Voila le Monaco Sixty Nine, named after the model’s 1969 debut, released in 2005. “On one side it uses the Caliber 2 mechanism,” wikipedia.org reports, “on the other it features a quartz Caliber HR03 readout.”

How off-brand, how crazy is that? That’s twenty years after the quartz crisis pulled the rug from under the Swiss watch industry. Wanna hear something even crazier? The Sixty Nine won the 2005 Le Grand Prix d’Horlogerie de Genève (GPHG); the same competition into which TAG’s entered a mechanical Monaco for the Iconic award.
But as bizarre as the Sixty Nine is, the chrono-less quartz TAG Heuer Monaco is worse. It says screw the ground-breaking engineering that put us on the map. Here’s a downmarket Hollywood prop version of the Monaco for people who don’t give a damn about mechanical watchmaking history, authenticity or excellence.

[NOTE: I’m choosing to ignore the fact that TAG markets this large not-to-say bulky timepiece as a “ladies watch.” I reject the implication that women are the only buyers “frivilous enough” to buy it.]

The  Quartz TAG Heuer Monaco — available brand new at an authorized dealer for $1750 — is a complete betrayal of TAG’s heritage in general, and the Monaco in specific. Not that the company gives a damn. Their website can’t even be bothered to list which quartz movement hides inside the heavily discounted Monaco’s case.
In the face of the smartwatch’s march to world domination, traditional watchmakers are right to tap buyers’ nostalgia for the good old days, when a watch sat on your wrist obediently, doing nothing more than marking the passage of time. But this is lazy, depressing and wrong.