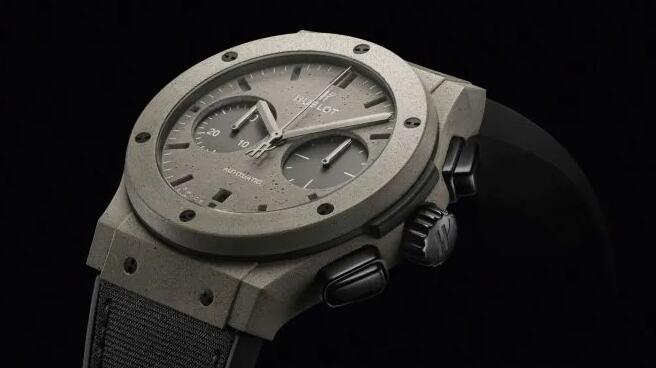 Since Hublot established its largest flagship in the U.S. on Fifth Avenue, the luxury Swiss watchmaker has become a mainstay of New York City. An unwavering beacon standing tall in its centre, Hublot is proud to honour the city with the latest iteration of its Concrete Jungle – Hublot Classic Fusion Concrete Jungle New York.
Concrete as an industrious material is noteworthy for its strength and endurance. As a city built on these foundations, New York is not just a place but a symbol of vigour and resilience. Hublot draws inspiration from the bustling streets, their exuberant spirit, brilliant energy and limitless opportunities moved by the city’s perpetual ability to endure, evolve and overcome. Drawing on these elements, Hublot has created an avant-garde tribute to New York’s bedrock of strength. With shared values to always be first, unique and different, the city is brought to life on a classic timepiece with a contemporary concrete twist.
Our concept of relationship to time has changed recently, and “New York Strong” is increasingly a way of life and an aspiration. The Classic Fusion Concrete Jungle New York presents the city’s sophisticated poise and everlasting elegance without ignoring its raw elements. Developed in an even more robust material, the Classic Fusion is reinforced in a fine concrete with minute detailing that evoke the city’s edges and structure. Muted grey tones juxtaposed against a black strap are quintessential New York with its ability to be simultaneously monochromatic and effervescent, uniform and unconventional.
” New York City is our home away from home, and Hublot gains so much inspiration from the place and people – risk-taking, innovation, adventure and of course unity, strength and resilience. It is an honour to pay tribute to a city that has a place in the hearts’ and minds’ not just of America, but the world.” – Ricardo Guadalupe, CEO HUBLOT
New Yorkers by design, Friends of the Brand Victor Cruz (TV Host and Superbowl Champion), Daniel Boulud (Michelin Star Chef), and Mariano Rivera (2019 Baseball Hall of Fame Unanimous Choice Inductee) join Hublot in paying tribute to the city on which they have left a boundless mark. The powerful campaign breathes life into the city, featuring them in significant landmarks. From Victor Cruz standing against the famed Brooklyn Bridge, to Chef Daniel Boulud in his esteemed kitchen at Restaurant Daniel, and Mariano Rivera striking a pose in front of the most iconic American landmark of all, the Statue of Liberty. Beaming light into the unstoppable city, Hublot pays its respects to the Concrete Jungle.
“When I was told about the concept of this campaign, I felt like it fit exactly where I am in this moment. I’m sure the Concrete Jungle theme resonates with everyone during these times. It’s that grit that makes the people of New York unlike anyone else. We were made to go through difficult times and emerge successful once the smoke clears” –Victor Cruz, TV Host and Superbowl Champion
“Nourishing the people of New York for the past 2 decades has been a blessing. Though it has been a very different year, we are grateful for how strong the city and its people have proven themselves to be. Just as we are constantly adjusting our kitchens to reflect the times and what is important, we are always looking for ingenuity, and New York City has driven us to stay inspired and passionate. This surprising watch is a perfect representation of the city’s creativity and strength, and I am proud to pay tribute to New York with Hublot Classic Fusion Concrete Jungle New York.” – Daniel Boulud, Michelin Star Chef
” Once a New Yorker, always a New Yorker. I have experienced the highs and lows alongside this city and am honoured to take part in a campaign that shows New York’s true spirit of strength and energy. Hublot helped me celebrate a major milestone in my life last year, and I am thrilled to be able to partner with the brand again, this time to celebrate our beautiful city and its people.” – Mariano Rivera, 2019 Baseball Hall of Fame Unanimous Choice Inductee
The 2nd iteration of Hublot’s Concrete Jungle is fortified with a more durable concrete material, staying true to the brand’s Art of Fusion principle to promote groundbreaking innovation. The concrete material is composed of 65-75% fine cement, 25-30% epoxy resin replacing water in standard concrete, and 5-10% fiberglass replacing steel to reinforce the concrete. Hublot’s Nyon design team upgraded the epoxy resin with an anti-UV additive to prevent colour change over time and applied an anti-graffiti treatment on the finished components to prevent the concrete from becoming impregnated with other contaminants like dirt. The case and dial formed with this enhanced concrete will prove to withstand the test of time, underlining the importance of meticulous craftsmanship in creating enduring pieces.
The concrete encases the HUB1143 Manufacture self-winding chronograph movement with a water resistance of 50 meters and a power reserve of 42 hours. Outfitted with black ceramic pushers and crown, and an all-black textile strap with black stitching, the contrast highlights the fine details on the concrete dial. Limited to 50 pieces, the Hublot Classic Fusion Concrete Jungle New York will initially be available exclusively at Hublot’s Fifth Avenue flagship boutique and on Hublot.com before becoming available in Hublot boutiques nationwide.