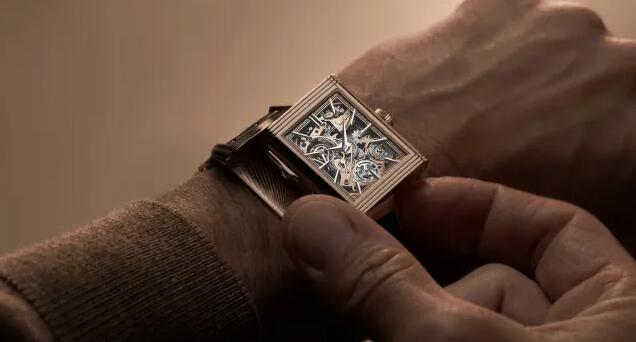 Ninety years after the birth of the Reverso, and 150 years after creating its first minute repeater, Jaeger-LeCoultre presents the Jaeger Lecoultre Reverso Tribute Minute Repeater. Offered in a limited edition of 10 pieces, this exquisite new timepiece unites two of the key themes that have defined La Grande Maison for much of its history: an exceptional expertise in chiming watches and the timeless story of the Reverso.
With its distinctive Art Deco lines and swivelling case, the Reverso is one of the world’s most recognisable wristwatches. Its story embodies Jaeger-LeCoultre’s eternal pursuit of beauty and aesthetic refinement, expanding the Reverso’s stylistic realm by harnessing the full potential of its unique design. Allied to this is the Manufacture’s endlessly inventive quest for technical advancement – from the revolutionary idea of a case that could be flipped over, and the ingenious mechanism that made it possible, to the development of complications specific to the Reverso.
In the 1990s, amid the rebirth of mechanical watchmaking that followed the quartz crisis, the Reverso – with its distinctive rectangular case – became the vehicle through which the Manufacture would redevelop its expertise in high complications. Having mastered the added challenge that rectangular movements dictate an entirely different architecture from that of traditional round movements – a particularly demanding challenge for chiming mechanisms – Jaeger-LeCoultre presented the Jaeger Lecoultre Reverso Tribute Minute Repeater in 1994. It was the first time the Maison had miniaturised a minute repeater for a wristwatch and was the world’s first rectangular minute repeater movement.
In fact, Jaeger-LeCoultre’s mastery of chiming mechanisms dates back to the very foundation of the Manufacture in 1833, and its deep expertise is today confirmed by an archive of more than 200 chiming calibres. Since that first Reverso minute repeater of the 1990s, Jaeger-LeCoultre’s engineers and designers have redefined the benchmark for acoustic quality, harnessing new technology in service of this noble tradition.
Embodying technical advances such as Jaeger-LeCoultre’s patented trebuchet hammers, silent regulator and a new generation of gongs, the Reverso Tribute Minute Repeater is powered by a revised version of Calibre 944 – a movement entirely conceived, designed and produced within the Manufacture. The new timepiece is distinguished by dials on both the front and reverse sides, bringing a fresh visual expression to the timeless Reverso design, as well as to the minute repeater mechanism itself. While the dials both display the same time, they are very different in character – one exuberant, the other more sober. Both are a testament to the beauty of fine movement decoration and the exceptional level of craftsmanship that resides within the Manufacture.
The front dial is entirely skeletonised, revealing the full complexity of the minute repeater mechanism and presenting a mesmerising display of moving parts when the minute repeater is activated. Beneath a large bow-shaped bridge that sweeps from 11 o’clock to 7 o’clock, the components appear almost to be floating in three dimensions, the sense of visual depth and transparency enhanced by faceted indexes that are cantilevered from the chemin de fer minutes track. With a gleaming golden finish, the bridge, hour markers, gongs and several other components perfectly match the colour of the rose-gold watch case.
While the exuberance of the front dial contrasts with the rectilinear geometry of the Reverso case, the relative sobriety of the reverse dial echoes and amplifies those straight lines. Vertical Côtes de Genève stripes extend over the entire height of the main plate, which also serves as the dial. Showcasing the timekeeping mechanism, with subtle colour accents provided by blued screws and golden hands and hour markers, the cool silver tone of the metal provides an elegant counterpoint to the warm rose gold of the case.
Set into the side of the watch case, the slider that activates the chimes has been specially designed for the new Jaeger Lecoultre Reverso Tribute Minute Repeater to be as slim as possible, without sacrificing ergonomics. Visually complementing the Art Deco lines of the case, the effect is one of great refinement.
In showcasing both technical complexity and the aesthetic crafts, the Reverso Tribute Minute Repeater underlines the eternal modernity of the Reverso design, marrying the technical prowess of the Manufacture Jaeger-LeCoultre to its eternal quest for new forms of visual expression.