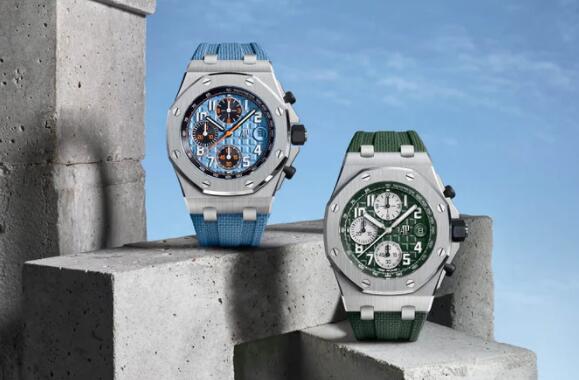 The Audemars Piguet Royal Oak Offshore Chronograph, AKA “the Beast”, the oversized for its time, extra-sporty extension of the Royal Oak that divided opinions at its introduction in 1993 (word is, Gérald Genta was not a fan; yet it still won over legions of others) is seeing a major release this year across two sizes with in-house movements. The 43mm versions were teased out in the first half of the year. The 42s, based on the original Offshore size, are brand-new, and we’re bringing them to you today. Forty-two, it should be noted, is a great size for the Royal Oak Offshore, a watch that was always destined to make an impression. In the years since its launch, the Offshore has spawned variations all the way up to 48mm, but to me, it’s the original size of 42mm that is the most classic and best-fitting.

Back in the early ’90s, the ROO transformed a design icon associated with the 20th century’s best-known watch designer into a more ruggedly sporty watch that played with size and materials – in this case, rubber – ushering in a wave of oversized watches. The Offshore was ahead of the oversize trend, and it anticipated the category of haut de gamme experimental sport watches that today drive a major part of the luxury watch market. Without the Offshore, could there have been a Hublot Big Bang? A Richard Mille?
AP seems to be getting out in front of the Royal Oak’s upcoming anniversary by releasing a whole slew of new Offshore chronographs. The new arrivals range from the five Royal Oak Offshores in a 43mm size, dropped back in March, to five additional Offshores in a 42mm. Of these 42mm versions, we have two models with a Mega Tapisserie pattern on their dials – light blue and dark green, with applied numerals and rubber straps matching the dials. The green version has a stainless steel case and the light blue has titanium. Then there are three additional models with the Petite Tapisserie pattern, which pay homage to the original Royal Oak Offshore of 1993. There’s night blue paired with a stainless steel case and bracelet, grey paired with a titanium case and bracelet, and night blue paired with an 18-karat pink gold case and bracelet.
All eschew applied numerals in favor of simple lume-filled markers. All feature AP’s new interchangeable strap and bracelet system, seen earlier this year on the 42mm Offshore Divers. And everything comes with a second strap option so that you can get interchanging right away. The interchangeable strap system is offered in three distinct sizes to match the cases and buckles of the different Offshore models, and is only offered on the Royal Oak Offshore models released this year.

All five of the 42mm variations are powered by the brand-new in-house caliber 4404, which matches the 4401 seen in the 43mm variations in terms of functions (column-wheel flyback chronograph with vertical clutch and date), diameter (32mm, 14 lignes), power reserve (70 hours), rate (28,800 vph), and jewel count (40). According to AP, the cal. 4404 (vertical sub-dial layout) and cal. 4401 (horizontal sub-dial layout) have the same base. But changing from the horizontal layout to the vertical one required an additional plate.
The 43mm is the more modern and bold of the two sizes, with large, gently curved black ceramic chronograph pushers extending out from the crown guards, and in all but one instance, a matching ceramic bezel. The case was also redesigned for greater ergonomics. Still, the 42mm, to me, looks more elegant, its rubber-coated piston pushers reminiscent of the original Royal Oak Offshore as designed by Emmanuel Gueit.

This is best exemplified in the new Petite Tapisserie models, which pay tribute to Gueit’s original. The steel version does so in particular, with its blue dial recalling the OG ROO, and the very dark blue rubber coating on the crown and pushers. It channels the original Offshore as closely as any watch since the 25th anniversary watch was announced in 2017. This year’s pink gold Petite Tapisserie model, which also has a blue dial and pushers, marks the first time an evolution of the 1993 model has appeared in this material. The titanium Petite Tap has a classic grey dial. All of them have see-through backs to view the new chronograph movement inside.
Both 42 and 43mm versions are tri-compax flyback chronographs with totalizers running up to 12 hours, but they are most obviously different in that the 43 uses a three, six, nine formation with the date at 4:30, and the 42mm uses a 12, nine, six sub-dial formation, with the date balancing things out at three o’clock. What’s interesting is it does not look like turning either formation 90 degrees would result in the same formation; in both cases, the running seconds are at six o’clock.
The Mega Tapisserie dial has been part of the Royal Oak Offshore story since it debuted in 2001. The new versions have a steel case (for the blue dial) and titanium (for the green dial) and black rubber coatings on the pushers and crown. The light blue of the steel version and the dark green of titanium are pretty far apart on the spectrum – one more L.A. or Miami and the other more NYC, I think, but both are squarely in the wide wheelhouse that is the Offshore.
The 43mm chronographs favor darker neutral tones, with dials in black, smoked brown, blue, or grey. There are five versions in all – two steel and two titanium, and a third on 18-karat pink gold, and they all have the same cal. 4401 automatic flyback chronograph movement that made its debut in the Code 11:59 line. Each of these comes on an interchangeable rubber strap, with an additional interchangeable strap in either rubber, calfskin, or alligator, depending on the model.
It’s a lot of new Royal Oak Offshore Chronographs for one year, that’s for sure. And they touch on a few different styles over two different sizes that are just one millimeter apart. As for the Royal Oak more broadly? Well, we haven’t even gotten to 2022 yet. Whew.
The Audemars Piguet 42mm Royal Oak Offshore Selfwinding Chronograph. Cases in stainless steel, titanium, or 18-karat gold. Three Petit Tapisserie dial models featuring cases and bracelets in 18 karat pink gold (ref. 26238OR.OO.2000OR.01), stainless steel (ref. 26238ST.OO.2000ST.01), or titanium (ref. 26238TI.OO.2000TI.01); two models with Mega Tapisserie dials and cases in either titanium (ref. 26238TI.OO.A056CA.01) or stainless steel (26238ST.OO.A340CA.01). In-house automatic flyback chronograph movement with column wheel and vertical clutch, cal. 4404. Movement beating at 28, 800 vph with 70 hours of power reserve and running in 40 jewels.