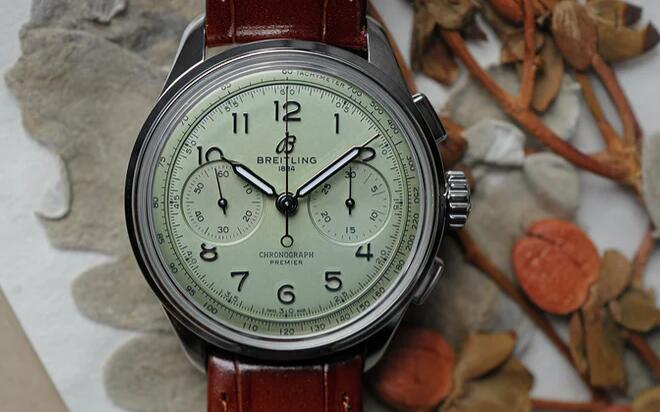 When Breitling launched the Premier line in 1943, it quickly became a pillar of the brand. Back then, the collection represented an evolution. Before ’43, the brand was known for its utilitarian precision instruments, namely military and aviation watches. The Premier line shifted the emphasis to aesthetics and design. This intersection of function and form has remained essential to the modern Premier lineup. And now, the brand is welcoming a new subset to the line – the Premier Heritage Collection – inspired by Breitling’s original multigenerational family leadership.
The Premier Heritage debuts with three model families, including the Premier Heritage B09 Chronograph seen here. This series nods to Léon Breitling’s son Gaston (who created one of the first wrist-worn chronographs with an independent pusher) and draws inspiration from the Premier chronographs of the 1940s, developed by Léon’s grandson Willy.
With the Breitling Premier Heritage B09 Chronograph, you have two quintessential chronos, at least on paper. Each features a round 40mm case with a horizontal, two-register dial layout framed by a tachymeter scale. It’s all highly legible, with Arabic numeral hour markers and Super-LumiNova on the hour and minute hands. And inside, you have the manually wound Breitling Manufacture Caliber B09, which is based on the Breitling Manufacture Caliber 01.
From a functional perspective, the Premier Heritage B09 Chronographs fully stick to Breitling’s roots, offering top-notch precision and reliability with modern upgrades in all the areas you’d expect. What you wouldn’t expect is the stylistic departure from classic Breitling – or even from most chronographs.
The Breitling Premier Heritage B09 Chronograph comes in two variations. The first offers a standard stainless-steel build, but – here’s the twist – it boasts an absolutely killer pistachio green dial. Yes, green is quickly becoming the new blue in the watch space, but we don’t typically see green like this. Breitling has achieved a really stunning hue – not too minty, not too olive. You could easily play the color up or wear it as more of a neutral. It’s no secret that green is my favorite accent tone in watches (I still can’t stop thinking about the forest-y Spring Drive GMT SBGE257, and I’ve long been a Kermit fan), but man oh man, this takes the phrase “green with envy” to a whole new level.
The second variant of the Breitling Premier Heritage B09 Chronograph deserves equal attention. At first glance, you have a more subdued aesthetic with a traditional silver dial that’s inherently neutral. But it’s paired with an 18k red gold case and dial accents, plus a semi-shiny alligator leather strap, making the look and feel exponentially more elevated than your average chrono. There’s no dressing up or down here; there’s only luxury in its purest form.

This isn’t a dressy chronograph – it’s a dress watch that happens to have the added bonus of a chrono function.