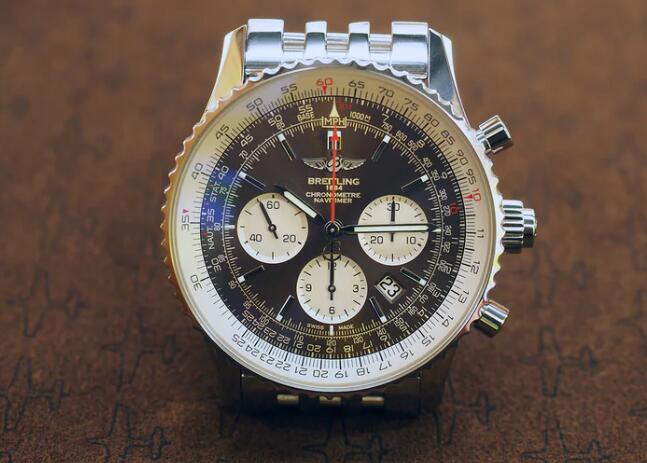 Breitling is a pretty polarizing manufacture. Sure, they used to make true classics like the Top Time, but somewhere along the way they seem to have gotten lost. The watches got bigger and the advertisements more offensive. However, love them or hate them, you can’t fault them for maintaining a strong brand identity and following it to the end (ask your average non-watch person and they will likely list Breitling as one of the brands they know next to Rolex and Omega). But despite all this, sometimes they come out with a cool watch that we here at Breitling Navitimer Rattrapante can really get onboard with – and the Breitling Navitimer Rattrapante is definitely one such watch.
Breitling and the Navitimer have a very rich history. The Navitimer was introduced in 1952 when Breitling first created a “wrist instrument” designed for aviation. At the time of its design, it was the ultimate tool watch and featured every tool that a pilot would need while flying. It integrated the slide rule, which could also be found in the Chronomat, for taking in-flight measurements. In the first year of production, the watch was powered by the Valjoux 72 movement but later moved to the Venus 178, then they moved to the famous automatic caliber 11. The watch saw many iterations throughout the years (including a quartz digital version) and recently celebrated its 60th anniversary in 2012 with a limited edition blue dial version with an in-house movement.
The Breitling Navitimer Rattrapante is the latest addition and it was released earlier this year at Baselworld. It features both a take on the original Navitimer dial and a split-seconds chronograph function and is the first time that the manufacture has made this complication entirely in-house. You may recall the Duograph from Breitling, a split-seconds chronograph from the 1940s, and this watch is now very collectible, so it is nice to see Breitling referring back to its heritage.
The caliber B03 is chronometer-certified and is an automatic movement that is visible through the sapphire caseback, which is a really nice touch. The finishing is decent and the rotor, floating over the top of the chronograph works, is branded with the Breitling name. It is important to emphasize that this movement was all made in-house, showing that Breitling is making serious moves in a market where people care about craftsmanship more than mass-produced watches. A rattrapante is one of the more difficult complications to engineer, and Breitling deserves real credit for tackling it.
In addition to making its own in-house rattrapante, Breitling also equipped the start-stop mechanism with a special isolating mechanism to preserve energy. As far as I can find, the Patek Philippe reference 5370 is the only other watch to use something like this. Breitling’s mechanism has two patents and allows the movement to be much more efficient. Basically, when you start the chronograph and stop the first chronograph hand, it is held in isolation, separated from the still-running train, creating less friction. When you press the button again, the hand is re-connected and continues as usual.
The Breitling Navitimer Rattrapante is available in two cases, steel and red gold. It measures a whopping 45mm in diameter, so it still falls into ridiculously large territory. The case shape itself is similar to the original Navitimer, with the thin ridged bezel and turn-down lugs. The chronograph pushers are round and large enough for easy operation, just how you would want them to be, and the split-seconds function is activated by a button set into the crown. Action on all the functions is crisp and clean, though we got limited time with this piece at Baselworld (and are looking forward to exploring it further soon).
The brown dial falls right on trend with the faux-patina epidemic we saw at Baselworld. To be clear, I still have not decided how I feel about this trend – the watch manufactures are kind of damned if they do and damned if they don’t. People wanted vintage-inspired watches and got faux patina, which in theory looks great but in reality just doesn’t feel as cool. But I digress.

The dial on the new Breitling Navitimer resembles a vintage tropical dial and features three registers and a date window. The date window is placed between four and five o’clock, which is probably my least favorite place to put a date window. I’ll let you all fight to the death on that down in the comments section though. The red gold model is available on a leather, crocodile, or rubber strap, while the steel has all these options plus a steel bracelet available as well.
Overall, I think that this is a really nice release from Breitling. It shows that the brand is taking real watchmaking more seriously, and in a big way. It is clear that time and effort was put into coming up with something interesting that mixes innovation and heritage, and even though this watch is not for me on a personal level, I can see how others might want to purchase it.