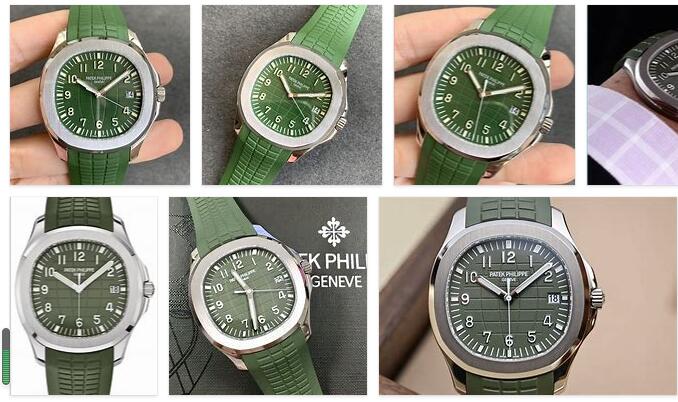 A little bit of background on the Aquanaut: When first launched in 1997, the original Aquanaut Ref. 5060A created quite a stir. The watch – matched with a tropical rubber strap – was a sportier, more casual reiteration of the classic Nautilus. It even shared the Nautilus’ rounded octagonal case design. The Ref. 5060A would soon evolve into the more refined Aquanaut Ref. 5167; the reference is still in production and is perhaps the Aquanaut that most are familiar with today. Fast forward to 2017 and the Aquanaut celebrates its 20th birthday. For the occasion, Patek Philippe Aquanaut green presented a brilliant blue-dialed Aquanaut in a “Jumbo” format: the Ref. 5168G. The watch was 2.2 mm larger in diameter compared to the Ref. 5167 and, naturally, had its critics and proponents. This year, another Ref. 5168G is born, making it only the second variant of this relatively new reference. Enter, the Aquanaut “Jumbo” Ref. 5168G in khaki green.

The case of this latest Ref. 5168G is completely identical to 2017’s seminal Ref. 5168G: 18K white gold, a sporty 42.2 mm in diameter, and a slender 8.25 mm in height. There are no changes to case finissage as well, as the same alternating satin and polished finish is still there.

What’s obviously changed, though, is the dial colour – from gradient blue to khaki green. The colour change grants the new Aquanaut an even more casual appearance. Of course, to match the dial, the watch is also paired with a khaki green rubber strap. The other elements on the dial – the hour and minute markers, the hands, the company marquee, and the date display – remain unaltered.

Driving the new Ref. 5168G in khaki green is the 213-part, 29-jewel Calibre 324 S C. This is the same movement used in the first Ref. 5168G. It has a power reserve of 35 – 45 hours and operates at a modern 4 Hz beat rate. The automatic movement incorporates some of Patek Philippe’s most notable innovations, including the Gyromax balance and the Spiromax balance spring.The view of the case back is gorgeous. Stamped with the Patek Philippe Seal, the brand ensures that the movement is finished to high standards. The 21K gold central rotor is decorated with circular waves and engraved with the Calatrava cross. The top surface of the bridges is finished with Geneva waves while their edges are chamfered and polished. The screw heads are polished to a sheen while the base plate is adorned with tight and even perlage.The Patek Philippe Aquanaut green “Jumbo” Ref. 5168G in khaki green retails for USD35,000. While the watch does lead the pack in its genre, the competition from other brands shouldn’t be ignored.

Last year’s Breguet Marine Ref. 5517 comes to mind as a worthy rival. Functionally, the Marine and the Aquanaut are indistinguishable. But from a design perspective, the Marine Ref. 5517 is far more ornate. The case is much more nuanced than the Aquanaut’s. In typical Breguet Marine fashion, the case features the brand’s iconic coin edge fluting and crown guard, as well as proprietary lugs. The dial is rendered in a stunning blue with engine turned motifs depicting the waves of the sea. The Calibre 777A that beats within is well-finished, with the top surface of the bridges striped to resemble a ship’s deck and the central rotor designed to look like a ship’s steering wheel. The watch in white gold is priced at under USD30,000. While not as collectible, the Breguet Marine Ref. 5517 at its price represents a solid alternative to the Aquanaut “Jumbo” Ref. 5168G.

At exactly the USD35,000 mark though, one need not look further than the Vacheron Constantin Overseas Self-Winding in gold. The watch is technically superior in a few ways, including anti-magnetic protection for up to 25,000 A/m, 15 bar water resistance, a 60-hour power reserve, and a strap quick-release system. It also comes with two straps at purchase: a rubber and an alligator leather strap, making it extremely versatile. The Calibre 5100 within does what the Calibre 324 S C does (central hours, minutes and seconds; date) and is finished to a similar level, as evidenced by its Hallmark of Geneva certification. The Overseas Self-Winding may indeed be the better way to go about spending USD35,000 – instead of the Aquanaut – if collectability is not a concern and if you like its design.

Well, this one’s gonna be a fan favorite. Patek Philippe is updating the Aquanaut with a new dial and strap combination – this time in rugged shades of green. They’re calling the color “khaki green,” but I think you could easily call it drab green, army green, or even olive green and be pretty spot on. Interestingly, Patek chose the 5168 as the canvas for this new hue instead of the more obvious 5167. The latter is what we think of as the “standard” Aquanaut, with the traditional 40mm case size, while the 5168 is noticeably larger at 42.2mm across. Additionally, the 5168G is made of solid white gold instead of steel (as noted by the G at the end of the reference number), meaning that this tough-looking sports watch is actually made of a precious metal. This is only the second version of the ref. 5168G, with the original blue version having been released in 2017 to celebrate the Aquanaut’s 20th anniversary.

If you’re not a Patek collector (or at least friends with a few…or a lot), you’re probably reading this thinking “A green Aquanaut? Seriously?” That’s fair, this is technically just a dial and strap update to an existing reference, which is to say that it’s normally not something we’d think of as super news-worthy. However, the Aquanaut is an extremely in-demand watch, with years-long waitlists for some popular models, and the green-dialed Aquanaut is something of a legend amongst those in the know. The fact that Patek is bringing it back is huge news.

The original green-dialed Patek Philippe Aquanaut green was in fact a ref. 5167A, which is the 40mm stainless steel version of the Aquanaut. Only a handful were made – many believe the number to be under 10, and some even say fewer than five genuine examples exist – and they were special orders for good clients, produced around 2010/2011. You couldn’t just waltz into your local retailer and pick one up out of the case. They very rarely change hands and the last one I could find in a public auction sold back in 2015 at Sotheby’s, fetching CHF 52,500. Today one of these would almost certainly be a six-figure watch at auction.

For a while, you could purchase the matching khaki green rubber straps separately from Patek retailers as long as you owned a ref. 5164 or ref. 5167, and it became something of a fad amongst collectors to add these to their standard black-dialed Aquanauts to create sort of mock-khaki watches. Eventually Patek caught wind of what was happening and stopped allowing retailers to sell the green straps to customers who didn’t own a genuine khaki green watch. Now even the straps are collectable.

So yeah, a new green Aquanaut that customers might actually be able to find and buy for themselves? A big deal indeed.