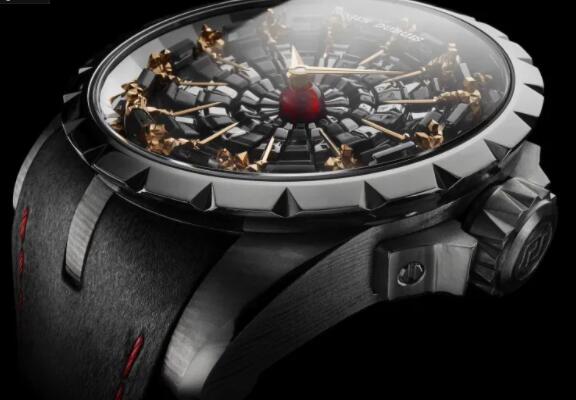 Made of Damascus titanium, the latest interpretation of the iconic Roger Dubuis Excalibur Knights of the Round Table collection from Roger Dubuis offers a stunning combination of contemporary craftsmanship and technical savoir-faire.Powered by Calibre RD821 and fitted with a vintage grey red-stitched calf leather strap, the new Roger Dubuis Excalibur Knights of the Round Table collection is a daring demonstration of the Maison’s exceptional expertise, passion for challenges and obsession with reinventing iconic legends. It sets an incredible stage for the fabled knights micro-sculpted by hand, while reinventing the ancient art of Damascus steel through a Damascus titanium alloy worked in a technically and aesthetically innovative manner.Twice as light as steel yet 30% more resistant, this material is totally biocompatible. Starting from a block of Damascus titanium, the case and bezel are machined and then dipped in an acid bath designed to reveal the inimitable pattern. This exclusive treatment, combined with the Haute Horlogerie decorative techniques applied to the 45 mm case of this model, represents a novel approach for Roger Dubuis.So as to preserve the singular allure of the raised Damascus motif, the Maison’s watchmakers opted for a variety of refined techniques.Well-accustomed to performing movement decorations meeting the rigorous Hallmark of Geneva criteria, they opted to implement them here on the watch exterior.These subtle finishing touches notably include delicate straight-graining creating an appealing matt finish on the case sides; brushing that enhances the smooth look and touch of the curving lugs; as well as extremely precise hand-chamfering using a variety of files. The result is a series of straight and flat angles such as no machine could ever hope to achieve.

Its 3D dial features an outstanding display of craftsmanship skills including a stunning combination of dark grey enamel, white gold and Murano glass. The dial structure is composed of white gold and dark grey enamel, creating the perfect stage-setting for the crafted Knights of the Round Table. Cast in pink gold and just 7mm high, each knight is meticulously micro-sculpted, engraved and finished by hand. They represent striking examples of Low Poly Art, a singular technique in which polygonal facets are used to create sculptures or painting.

Each sword represents an hour. The case-back is engraved with their famous oath of allegiance to King Arthur: “Around this table, the bravest knights will gather as equals. They will set forth in search of adventure, righting wrongs, protecting the weak and humbling the proud”.

A watch designer’s job is to create a relationship between the wearer and their watch. The new Roger Dubuis Excalibur Knights of the Round Table II watch does this is a clever way. By decorating the dial with a culturally significant diorama, the wearer is not only comfortable with an image they have seen many times before, but they are also susceptible to its potential as an emotional trigger. With a single glance, a whole gamut of feeling can be released: Pride, passion, patriotism, for example. The Roger Dubuis Excalibur Knights of the Round Table II picks up where the first Round Table watch left off, moving the design brief in a new direction and elevating the craftsmanship to a new level.