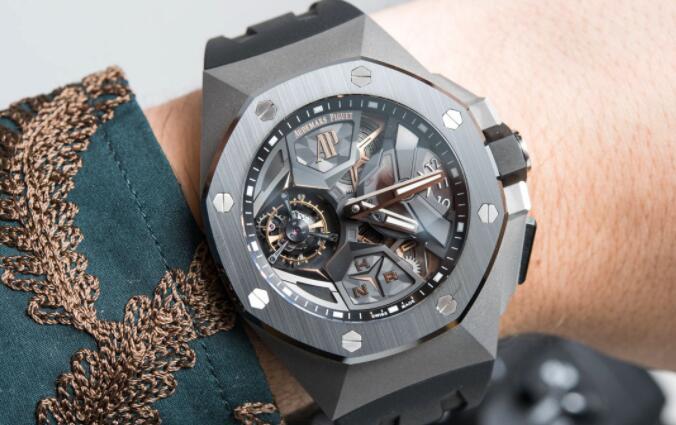 Blending titanium and grey ceramic, the new Audemars Piguet Royal Oak Concept Flying Tourbillon GMT offers an avant-garde aesthetics as a frame for an advanced openworked hand-wound movement endowed with a flying tourbillon and a GMT function.
It features a 44 mm x 16.1 mm sandblasted titanium case with grey ceramic bezel, screw-locked crown and pushpiece. The pushpiece guards are also made of sandblasted titanium.
The dial juxtaposes sandblasted blue titanium bridges and silver-toned components. Fully visible at 9 o’clock, the flying tourbillon is complemented by a crown position indicator at 6 o’clock and a second time-zone indicator at 3 o’clock.
The Manufacture Calibre 2954 beats at 21,600 vibrations per hour with a remarkable 10-day power reserve.

The movement’s blue bridges, also visible through the sapphire caseback, are matched by a blue rubber strap with sandblasted titanium AP folding clasp. An additional black rubber strap is delivered with the watch.
The Audemars Piguet Royal Oak Concept Flying Tourbillon GMT is about as avant-garde an offering as one will find from a top-tier Swiss manufacture today, which seems to me to be an interesting thing to consider. The line and the basic design of its case have been with us for 18 years. The first Royal Oak Concept watch, designed by Claude Emmenegger, was presented in 2002 to mark the 30th anniversary of the Royal Oak, and it came with a movement developed by Audemars Piguet Renaud & Papi (APR&P). As its name would lead you to believe, the Royal Oak Concept line tends to be a bit more experimental than, say, the Royal Oak Offshore. It’s been a springboard for technical developments. The first AP Supersonnerie was a Concept piece, for example.
The watch we are introducing today is actually the second Royal Oak Concept Flying Tourbillon GMT. The first version came out two years ago and was itself a refresh of the slightly differently named Royal Oak Concept GMT Tourbillon. What made the refreshed 2018 version different was its asymmetric design and its use of a bridge-less (or flying) tourbillon.

The watch of two years ago combined a titanium case, a black ceramic bezel, a blacked-out dial/movement, and applied rose-gold accents, which added up to a pretty flashy look. Today, in a limited edition of 30 pieces to be sold through Paris AP retailer Arije, we’ve got a Royal Oak Concept Flying Tourbillon GMT that delivers a much more low-key vibe. Virtually everything about it is a muted, monochromatic grey, including the display, the rubber strap and clasp, and even the movement’s back.